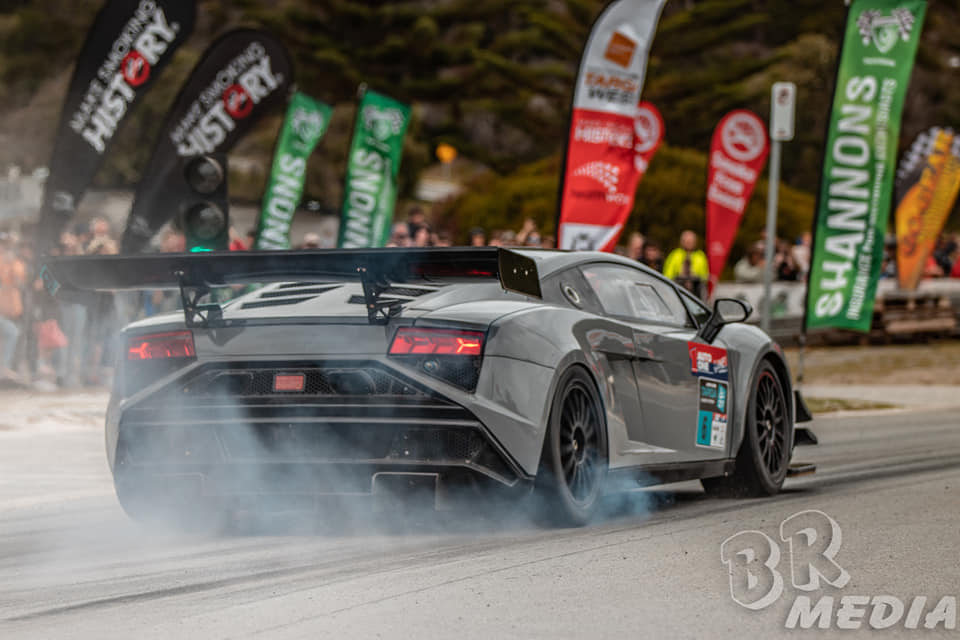 Thousands of spectators lined the streets of Albany at Middleton Beach for the second day of the 2021 Auto One Targa Albany Sprint which was expanded this year from one day and one sprint to two days and three sprints.

On Sunday, there were two race lengths at the Auto One Targa Quaranup Sprint; a 2.11-kilometre speed event (driver only) or a 4.5-kilometre course up to the historic Camp Quaranup (a rallysprint requiring driver and co-driver and full safety set up).

Fastest along the 2.11-kilometre Auto One Targa Quaranup Sprint with a blistering time of 54.78 seconds was 20-year-old former V8 Supercar racer Alex Rullo in a 2014 Lamborghini Gallardo.

Rounding out the overall top three of the Rallysprint, some 10 seconds behind the winners, was reigning Targa West title holder Mark Greenham / Steph Esterbauer in their 2006 Mitsubishi Lancer Evo 9.

The main event, the Auto One Targa Albany Sprint, a challenging 2.8-kilometre course from the Hybla Tavern at Middleton Beach to the Anzac Centre on Mt Adelaide, was won by Alex Rullo a 2014 Lamborghini Gallardo with his fastest run clocking a time of 1:28.19 minutes. Rullo taking two wins from two races in Albany.

His father Peter Rullo raced the same course in the same car and his fastest time was 1:35.13 minutes, which placed him in third outright.

The rally wasn’t without challenges.

“We had some serious issues – on Thursday (before the event), we almost pulled out, there were so many things going on with the car, things we didn’t realise and things that happen when it sits in storage for four or five years,” Gooseberry Hill resident Rullo said. 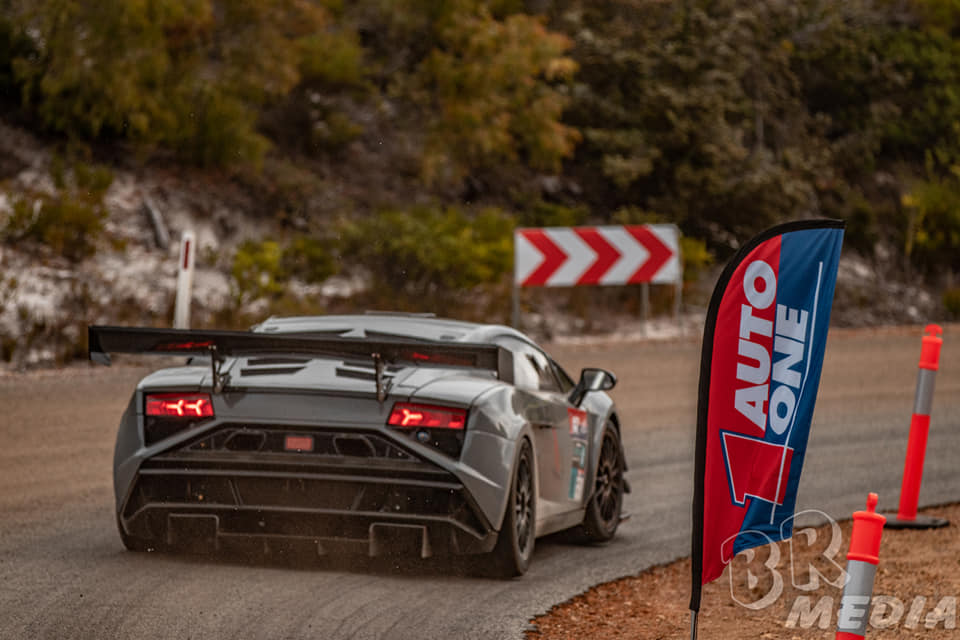 “There was a lot of hard work and late nights to get it running, and when we did, we didn’t expect that we’d have reliability and speed – it was great to reward the boys with a functioning and winning car.

“On Sunday (the 2.11km speed event), I focussed on getting comfortable with the car. At Middleton Beach (on Monday), I had the car on the rails, each run pushing a little harder. I knew where I could make up time after each run and I focussed on that. I tried to get under 1:30 minutes and was pretty happy that I was able to do that.”

Rullo shaved 6 seconds off his time between his first run to his final and fastest run.

Rullo said that the Lamborghini was built as a GT3 circuit car, not designed to be stationary for periods of time and thus not fitted with cooling radiator fans. Which explains the use of two leaf blowers to keep the engine cool.

“We also had an electrical issue in terms of starting the car, so we had to keep it running, and keep it cool,” the 2019 Bathurst racer said.

“The event was pretty awesome, and the Sunday stages were high speed, really challenging, really enjoyable. All the Targa West events are enjoyable with a great vibe from everyone from organisers, officials and competitors. It’s fun weekend away.”

Will White had his share of issues too, a failing clutch on the last section of the Rallysprint on Sunday exploded, smashing the bell housing on the Evo 9’s gearbox.

“I was able to get the Evo across the line and take the win, which I’m absolutely thrilled about. It was an awesome event,” said the Dardanup local. 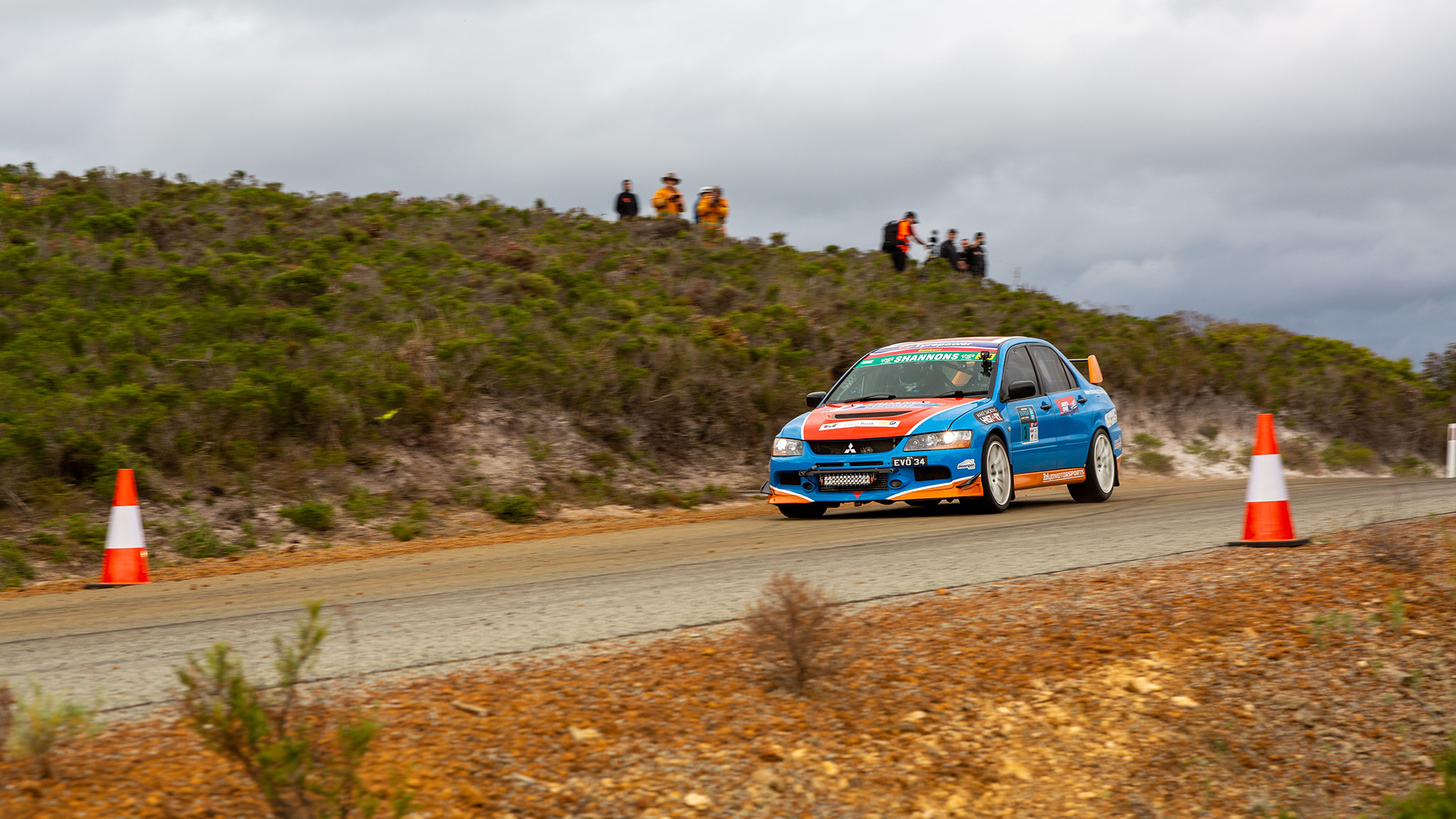 “Luckily my wife made a last-minute decision to come to Albany and we thought, we might as well race the Toyota Yaris! We wacked the Evo wheels on it, swapped the stickers over, installed a fire extinguisher and raced that on Monday.”

White said that he’d originally bought the 2020 Yaris GR as a development car for rallying but hadn’t yet built it. He finished the Middleton Beach rally in 32nd place.

“I’ve hardly driven the Yaris and didn’t want to hurt the car, but every time I put my foot down, every single warning light flashed and the thing was beeping at me ‘imminent crash’.

“After the first run, other drivers were having a yarn, and there I was with the instruction manual trying to find how to turn off all the warning bells!

“It was a good fun event with fantastic pieces of road, technical and high speed in the first part and a left entry into a right-hander, a double apex, a couple of blind crests – the whole skill of what we do coming into play.

“Matt my co-driver called good notes and I had my road position correct, which was crucial, any mistakes would bite you.

“It was awesome to see spectator points packed, so many people out enjoying the rally. We stayed an extra day in Albany to enjoy the region.”

The fastest local at the Middleton Beach main event was Glenn Badger in his 1980 Ford Escort Mark 2, finishing overall in 16th place with a time of 1:43.39.

“I loved the event, it was fantastic to compete on roads where I live, especially Camp Quaranup, I’ve been wanting to do an event there for ages,” Badger said.

“The Escort went well, the fuel pump was close to dying on Sunday, so we put in a new one for Monday and the car was great. It was the driver who needed to get his act together!”

“Everyone’s happy and the new Quaranup stage was a big hit with competitors, and they love coming to Albany,” Tapper said.

“The event ran smoothly, we had huge crowds on Monday with plenty of people in the Service Park trying to win the tool box Auto One was giving away.”

Ramon Panizza, Auto One Albany partner, sponsor and a competitor in a 1976 Ford Escort Mark 2 finished in 39th place posting time of 1:49.54.

“It is a privilege for Auto One to be associated with such a great team as Targa West,” Panizza said.

“We also created history on Saturday being the first Targa Rallysprint in the Great Southern.

“We thoroughly enjoyed being amongst the passionate drivers, volunteers and race fans and I cannot think of another event that attracts such a massive range of vehicles, from 1938 models to current 2021 EVs.”

There were about 100 competitors in all manner of cars competing in the Auto One Targa Albany Sprint, delighting thousands of spectators who attended the free event.

Spectators at Middleton Beach also enjoyed the RAAF flypast and aerobatics, a celebration of their 100thanniversary.

Auto One Targa Albany Sprint is run under the auspices of Motorsport Australia.

Results can be found at https://www.targaalbanysprint.com.au/